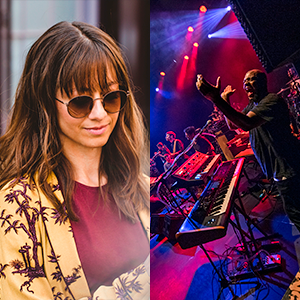 Yazz Ahmed
Although the British jazz scene is a hotbed of talent, few musicians can boast of having collaborated with such influential artists as Radiohead or Jamaican Lee Scratch Perry. His proposal breaks down prejudices and barriers between sexes, styles, eras and cultures: Yazz Ahmed imagines the future looking inside herself, on a tapestry where the aroma of her native Barein and the electric Miles Davis converge with sinuosity. Cleverly relying on samplers and pedals to twist the sound of his trumpet and suggest atmospheres full of color and texture, his concerts fuse modal jazz, psychedelia and electronics in a way that is as organic as it is personal.

Snarky Puppy
While the press still decides in which musical style to catalog them, the public sells out the tickets of Snarky Puppy at the Royal Albert Hall in London, and the industry endorses its popularity with four Grammy awards. Not bad for a project based in New York, which not so long ago played in small bars promoting its concerts word of mouth. From Snoop Dogg to David Crosby or Justin Timberlake, the curriculum as collaborators of the musicians who make up this collective is dizzying, and attests to the freshness and versatility that their character treasures, whether they sound like jazz, independent rock or funk.